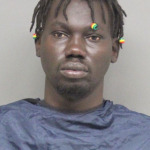 On Thursday, November 19th, an officer saw a white SUV with no license plates driving erratically at 27th and Fair Street around 4 a.m.  The officer attempted a traffic stop but the driver took off running stop signs and driving dangerously.  The officer decided not to pursue the vehicle due to safety reasons.

On Friday, November 20th at 1:30, officers saw the same vehicle at 27th and O Street.  Police followed it to 27th and R and officers then conducted another traffic stop.  This time the driver pulled over.  One officer spotted a handgun in the rear pocket of the front passenger seat.  When officers talked to the driver they also noticed a strong smell of alcohol.  Police asked the driver for identification and he stated he did not have a license and gave a fake name.

Officers then asked the driver to get out of the vehicle and that is when he started arguing.  Officers explained he was going to placed in handcuffs and the man pulled his arms away and then yelled at the officers.  Police were able to get the man cuffed and were walking him back to the cruiser when he started to struggle again but maintained control of the situation.

Police then searched the vehicle and found a loaded 9mm Smith and Wesson handgun and two additional magazines.

The driver was identified as 26 year old Loklok Thok and his Nebraska identification was found in his wallet.  The license was suspended.  Thok was taken to jail for DUI testing and his blood alcohol content was more than twice the legal limit.   He was booked for DUI, driving under suspension, carrying a concealed weapon, resisting arrest and giving false information to a police officer.

The weapon was not reported stolen but did not belong to Thok.