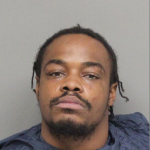 Lincoln Police were called to 32nd and U Street around 2 a.m. Friday to investigate a disturbance.  A woman stated her boyfriend was armed with a gun and had pointed it at her and threatened to killer and her family during an argument.  The man, 32 year old James Williams had left the home on foot before officers arrived.

Officers searched the area and found a loaded handgun matching the description the victim provided in a trash can at 32nd and Vine Street.

Officers returned to the home to talk to the victim when they heard arguing  Officers found Williams inside the home with the victim.  He was taken into custody without incident and booked for terroristic threats, use of a deadly weapon to commit a felony and for 3rd degree domestic assault.