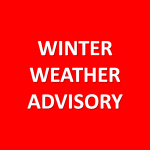 The Advisory is for portions of east central, northeast and southeast Nebraska and southwest and west central Iowa including the Lincoln/Lancaster County area.

Plan on slippery road conditions. The hazardous conditions could impact the morning commute.

Slow down and use caution while traveling. The latest road conditions for the state you are calling from can be obtained by calling 5 1 1.

Precipitation is expected to intensify overnight, especially toward the morning commute Tuesday. Snow is most likely northwest of a Columbus to Onawa line, though some freezing rain is likely for a time as well. Snow amounts of 2 to 4 inches are likely, with at least a light glaze of ice.

South of the Columbus to Onawa line, a mix of rain, sleet and freezing rain is expected toward morning. Some ice accumulations over two- tenths of an inch are likely, generally northwest of the Omaha Metro area.

However some icing is likely along Interstate 80 from Lincoln to Omaha and Council Bluffs where up to a tenth of an inch of ice accumulation is possible.