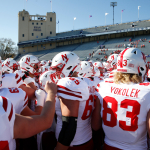 Nebraska continues to own the early time slot for kickoff times.

Two more start times for games were announced Monday. Nebraska’s home date with Illinois on November 21 is set for an 11 a.m. kickoff. The next week will be a noon start at Iowa on Black Friday.

The Huskers have their home opener against Penn State this Saturday—an 11 a.m. kickoff. Nebraska began the season at Ohio State with the same kickoff time. Only Wisconsin, which was cancelled due to rising positives of COVID-19 within the Badgers’ program, had a mid-afternoon start.

No other start times have been announced for the remainder of the Nebraska football slate: December 5 at Purdue and December 12 against Minnesota.