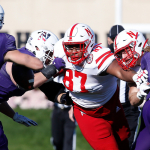 Coach Scott Frost said earlier in the week that he thought his team was “ready to turn a big time corner”. That corner just wasn’t in Evanston Saturday.

“We didn’t play a disciplined-enough game. It’s inexcusable that we only had 13 points in that game,” Frost said. “I give a ton of credit to them. They’re always good on defense, they did a good job. To play like we played and only have 13 points, that starts with me.”

Nebraska started with the ball and immediately got more touches with Dedrick Mills and Wan’Dale Robinson, both of whom had less than 10 rushing or receiving attempts against Ohio State. But once inside the Northwestern 30, a false start followed by a holding penalty back up Big Red too much to overcome, leading to the first of five punts from Will Przstup.

Northwestern easily drove to a touchdown on their first drive to take a 7-0 lead.

Late in the first quarter and up to halftime was the best offensive production for scoring points, though more were left on the field. Connor Culp made field goals of 38 and 36 yards to cut the deficit to one but missed on the next possession from 38 yards out.

The second Myles Farmer of the day set up Nebraska at the three of Northwestern where Mills punched it in to give the Huskers a 13-7 lead that would hold into halftime.

The Wildcats scored on their first possession of the second half just like the first to retake the lead. Nebraska threatened three times, including getting into the red zone twice, but both Adrian Martinez and Luke McCaffrey threw interceptions.

Northwestern held on to win the game by a 21-13 margin.

The Huskers were without center Cam Jurgens so Matt Farniok slid over to deliver snaps. Despite shuffling on the line and the offense lacking in push for most of the game, the production via yards was there. But of the six drives into the red zone, Nebraska scored on just three of them.

“Offensively, we had the ball down there (in the red zone),” Frost said. “We gotta punch it in. To come away with 13 points is inexcusable and that’s my fault.”

Luke Reimer made his season debut after missing the season opener in Columbus. Reimer led the team with 10 tackles and had the only sack for a Blackshirts defense that was without defensive backs Cam Taylor-Britt and Deontai Williams for the first half. Will Honas was also missing on the day with an injury.

The biggest question for Nebraska heading into the home opener against Penn State (0-3) is who will be taking the snaps. Both Martinez and McCaffrey threw interceptions Saturday and both had fumbles against Ohio State. The body of work is deeper for the incumbent, but a restless fan base that has hoped to see more results in year three of the Frost era seems ready for any change that might lead to more wins.

The Huskers and Nittany Lions kickoff at 11 a.m. next Saturday, November 14.