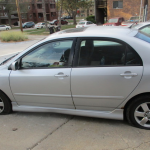 Two teenage boys are accused of slashing tires near 19th and Euclid around 5 Thursday afternoon.  Lincoln Police say a man called to report he saw three juveniles hunched down near his vehicle.  He walked out of his home and the teens took off running.  The man then saw two of his tires had been slashed.

Police contacted a parent and spoke with 15 and 17 year old boys who matched the description provided by witnesses.  They admitted to walking on 17th from South to C Street and slashed tires along the way.

Both juveniles were referred to juvenile court for 10 counts of Criminal Mischief and left with their parent.  At this time the estimated total damage amount is $1,850.

This investigation is ongoing in order to determine if these vandalisms are related to similar ones in the area in the past week.