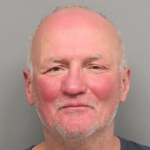 On October 24th around 7pm, police were called to the Star Tran bus office reference an incident that happened on a bus earlier that day.  The 40 year old female driver reported a man boarded her bus around 2pm.  She indicated that after driving her entire route she noticed the man was still on the bus and advised him that he was not allowed to ride the bus without a destination.  The man indicated he accidentally got on the wrong bus and needed to be returned where he got on.

She told the man he could remain on the bus but that this was her stop to take a break.  While she was off the bus the man then urinated inside the bus without her knowledge.  After she started driving the route again, she started to hear the man making racially charged statements to himself in the back of the bus.  She stopped the bus and told him to stop speaking in that manner or to exit the bus.  The man quit speaking for that time.

As they approached the Gold’s Building bus stop the man started to exit the bus but not before directing his racial epithets towards the driver and spit on her multiple times and lunged toward her.  The driver indicated she feared for her life and safety but was able to chase the man off the bus.  Officers were able to review the video which included audio from the bus which was consistent with the victim’s account.

Officers were able to identify the man as 65 year old Klayton Eammelli.  On October 30th around 3:30 am, police contacted Eammelli at the People’s City Mission where was taken into custody.  Eammelli was arrested for Spit or Expectorate Upon Another Person, Urinating in Public, and Hate Intimidation Offense.