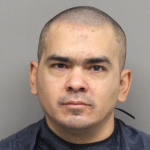 A 39 year old man is accused using a board to break car windows in the 12th and G area around 10:30 Thursday night.  Witnesses called police and they were able to give a discription of the person responsible.

Officers contacted Miguel Hyler who was walking down the street swinging a board.  He matched the description given by witnesses and was taken into custody without incident.

Officers began searching the area for other vehicles that may have been damaged.  Officers located five vehicle with their windshields broken with a total estimated damage amount of $1,750.   Hyler was arrested for five counts of Criminal Mischief.

During a search for other damaged vehicles, officers also located a 2015 Hyundai Sante Fe with stolen plates parked in the 1100 block of G Street that was found to be stolen out of Omaha.  Officers noticed the vehicle as it had damage which they thought may be related to the vandalisms.  The vehicle was processed for evidence, Omaha Police were contacted, and the vehicle was towed for safe keeping.