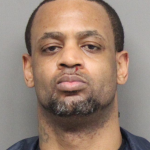 A man held at the Lancaster County Jail at 38th West O Street is facing more charges after an assault Saturday around 5 p.m.  Police were called and spoke to corrections staff who sad an inmate had been assaulted by another inmate and needed to be transported to a hospital by ambulance.

The victim is then seen exiting the bathroom with significant facial injuries.  The victim was treated at a local area hospital for multiple facial fractures.  The victim stated that Roebuck struck him multiple times in the face over a disagreement that happened earlier that day.