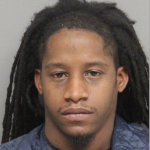 Gunfire rang out just before 9 p.m. Saturday night near 20th and Q.  Officers contacted witnesses who reported seeing a man with a group of people firing a gun into the air outside Mum’s Liquor at 22nd and O.

Separate witnesses reported hearing several gunshots from a third floor balcony of an apartment near 20th and Q.  They were able to tell officers the exact balcony the shots were heard coming from.  Officers then spoke with 27 year old Traves Nevels and three other men in the apartment.  Nevels was in possession of a handgun magazine with one round of 9mm ammunition in it.  Officers also found 9mm shell casings under the balcony to Nevels apartment as well as at Mum’s Liquor.  Officers also saw a gun holster in the living room inside Nevel’s apartment.

Officers then received a search warrant that was served after midnight.  A loaded 9mm handgun was found under a dresser in the bedroom  The ammunition inside the gun matched that of the shell casings located in the street and under the balcony.  Officers also reviewed video from Mum’s Liquor that shows Nevels inside the store with a gun on his hip.  Witnesses also identified Nevels as the man seen firing a gun outside of the liquor store.