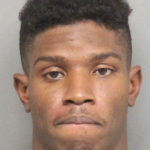 Police were called to People’s City Mission on October 19th at noon that someone had been threatening a man with a knife.   A man reported someone took some of his clothing.  he confronted a man who was wearing one of his sweatshirts.

The man gave the shirt back but then apparently pulled out a large black knife and said he was going to kill the victim.  The man then started swinging the knife and walked toward the victim.  Another person stepped in and the suspect took off.

Staff members were contacted and reported that they observed the confrontation and identified the man with the knife as Dwayne Sylvester Jr, 25 years old.  Police searched for the area Sylvester, however, he was not located at that time.

On October 20th just before 10 p.m, officers contacted Sylvester in the area of 14th and Adams on an unrelated incident.  He was taken into custody reference this case and arrested for Terroristic Threats and Use of a Deadly Weapon to Commit a Felony.