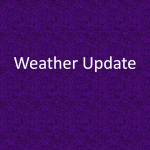 Areas of dense fog will continue through mid-day for parts of southeast Nebraska and southwest Iowa. Visibility under 1/4 of a mile is possible at times.

Strong thunderstorms are possible Thursday afternoon near a cold front in southeast Nebraska and southwest Iowa. However the latest trends suggest the area of strongest storms is likely to be east of a line from Clarinda Iowa to Falls City Nebraska.

Modest instability and strong shear will result in the potential for damaging winds and large hail with any storms that develop Thursday afternoon.

Freezing temperatures are possible for much of eastern Nebraska Thursday night, bringing an end to the growing season in areas from Albion to Scribner south to Beatrice and Fairbury.

Friday through Wednesday:  Overnight temperatures should fall into the 20s Friday night, ending the growing season across all of eastern Nebraska and southwest Iowa.

A strong storm system is forecast across the Plains on Sunday and Monday. This system will likely bring accumulating snow to parts of eastern Nebraska and western Iowa.

However there is no clear signal just yet on the amount of potential snowfall. If you have travel plans this weekend, be sure to monitor the forecast going forward. There could be some impact for the Monday morning commute as well.