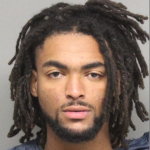 Lincoln Police were called to the Prairie Lake Mobile at 8600 Amber Hill Court around 12:30 a.m. Thursday after a clerk called to report a robbery.  The clerk said a man came into the store and initially asked for Newport cigarettes.  The man then pulled out a handgun and demanded money from the clerk.  After getting cash from the register, the man grabbed the pack of cigarettes and ran out of the store.

Just after 3 a.m.,  police received a call about a male crossing Highway 2 in the area of the Prairie Lake Mobile.  The caller, the manager from the store, believed he looked like the man responsible for the robbery.  Officers located 20-year-old Earl Hayes III  huddled near the Buffalo Wild Wings building.  He was identified as the same man in the security video during the robbery.

Hayes was taken into custody and during a search of his person, large amounts of cash were stuffed in his pant legs.  Also, on the ground next to Hayes was a full pack of Newport cigarettes.  Hayes was arrested for Robbery and Use of a Weapon to Commit a Felony.