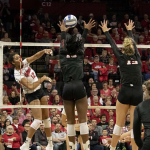 A Nebraska volleyball player has been cited for drunk driving and is being investigated for a possible hit-and-run.

Lincoln Police pulled over junior outside hitter Jazz Sweet early Sunday morning as she was driving the wrong way down a one-way. Police say Sweet had a .266 blood alcohol content, more than three times the legal limit. Fresh damage to her car was also noticed. According to an accident report, a man called LPD saying his vehicle had been hit while parked and that Sweet’s vehicle was responsible.

“Covid-19 has hit many people many different ways.  I have seen our players struggle in ways that I have not seen before.  We are aware of Jazz Sweet’s incident this past weekend.  Jazz is doing all the right things to address this situation and has shown much remorse with her teammates.  Our staff and team will support Jazz as long as she puts in the work she has before her in building the trust it takes to be a part of a great team.  Everybody faces adversity and challenges at some point in their lives and we teach our players it is all about how you handle it and bounce back.”

Husker volleyball is not playing a season this fall due to COVID-19 postponements. The season is set to resume in January.