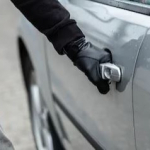 Police are looking for suspects who took a firearm from a locked car in the parking lot of Kawasaki at 6500 NW 27th Street around 1 p.m. Tuesday.

A video request has been made to Kawasaki to determine if a suspect can be identified.  This investigation is ongoing and anyone with information is encouraged to call Lincoln Police at 402-441-6000 or Crime Stoppers at 402-475-3600.