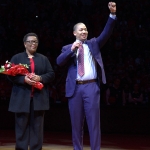 Lue served as an assistant coach for the Clippers under Doc Rivers last season. Previously, Lue spent parts of four seasons with the Cleveland Cavaliers, winning an NBA title in 2016. He is the only Husker to win NBA titles as a player and head coach. His player championships were with the Los Angeles Lakers in 2000 and 2001.