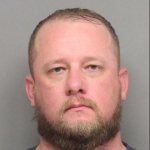 Lincoln Police were called to Aardvark Antiques at 58th and Arbor after the security guard had already apprehended the trespasser at gunpoint.    The guard said he saw 36-year-old Timothy Barnhart wearing a full face mask and walking among campers in the self-storage area of the business.  Barnhart ran but the guard caught up to him and held him at gunpoint and handcuffed him.

The Aardvark Self-storage facility is surrounded by a 7-foot tall chainlink fence and is gated.  There are a number of “No Trespassing” signs posted on the fence and around the property.

Barnhart was wearing all black clothing and was in possession of a backpack containing a prybar, bolt cutters, screwdrivers, flashlight, and an empty duffle bag.

Barnhart was booked for possession of burglar’s tools and 2nd-degree criminal trespassing.