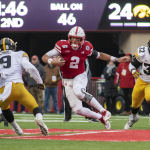 When Nebraska travels east to take on Big Ten West foe Iowa, it will be on the traditional Black Friday date.

Nebraska and Iowa have met on the day after Thanksgiving every year since the Huskers joined the Big Ten. This will be the 31st annual Black Friday game for Nebraska, dating back to 1990.

The Big Ten made the date of the game official Monday while announcing week one game times across the league and a host of other schedule updates.

Start times and television designations for games during the first week of the 2020 Big Ten football season were announced this morning, along with other select games later in the season. pic.twitter.com/Ho2eaVylXy