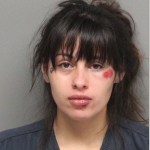 A woman is facing assault on an officer charges after an altercation September 27th near 14th and P.  Officers saw a woman around 2:20 a.m. and a man pushing and shoving each other.  As officers approached, the woman walked towards another group of people and the officer could hear the group yelling “Don’t Fight”.

An officer approached the female and told her to stop.  However, she grabbed and yelled at a person in the group.  The officer then grabbed the woman’s should to turn her around.  When the woman turned, she struck the officer in the neck causing pain and discomfort.

22 year old Emilia Martinez was then taken to the ground by the officer and in the process hit her face causing a scrape.  Martinez was treated at a local hospital before being taken to jail.  She was booked for assault on an officer, resisting arrest and obstructing a police officer.

It was later learned that Martinez had been threatening to assault someone in a group that had been holder her back as officers approached.