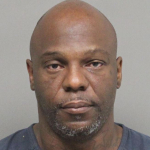 An arrest is made in a string of crimes involving assaults dating back to September 4th.

Police were called to 60th and Morrill Avenue on September 4th just after 10 p.m. when a 72 year old man reported he was robbed by an acquaintance the day before.  The victim identified the suspect as 45 year old Tomis Bedford, who had arrived at his home and spent some time together.  The victim then reported Bedford hit him once in the face causing him to fall and lose consciousness.  A 49 yea rold femal was in the home and reported being punched several times by Bedford.  The victim came to and both then discovered they were missing a 14 inch Bowie knife valued at $100 and the home and been rummaged through.  the woman was treated at a hospital for non-life threatening facial injuries and the man also had facial injuries.

On September 10th at 1 p.m., Police were called to 15th and D on a domestic assault report.   A 49 year old woman told police she had plans to meet with Bedford, who was her ex-boyfriend, to come get his belongings.  The woman reported Bedford became upset and struck her face causing bruising and swelling.  She ran and called police but Bedford was gone when they arrived.

On September 25 at 4 a.m., police were called back to 15th and D.  The woman reported Bedford entered her home through an unlocked door, was upset and argued with her.  The woman reported that a friend, a 34 year old man, entered the home and Bedford confronted him.  The woman ran and called the police.  Bedford hit the man several times in the head and took his money.  Bedford had left the area before officers arrived.  The victim had injuries consistent with the assault.

On September 26th just before 1 am, an officer spotted Bedford in the parking lot of America’s Best at 3001 NW 12th Street.  The officer was aware that Bedford was wanted for robbery and assault on the previous cases.  When the officer approached Bedford, he told him he was under arrest.  The officer attempted put handcuffs on him, however,  Bedford resisted the officer pulling his arms away and struggling to avoid arrest.  Bedford picked the officer up and threw him head first into a curb.

The officer experienced extreme pain and almost lost consciousness.  Bedford then fled on foot, however, the officer was able to get up and chase him.  Eventually, the officer caught up to Bedford who was taken into custody without further incident.  The officer reported feeling sick and almost losing consciousness several times.  He was treated at a local area hospital and found to have a closed head injury which is being monitored.  Witnesses in the area reported seeing the assault take place and feared the officer was going to be seriously injured.