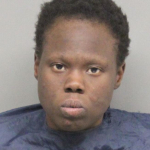 A 44 year old woman is facing charges an incident at 14th and E Street at 5:30 p.m. on September 27th.  An officer was flagged down at 12th and E after an assault.  A 44 year old woman reported she was walking and talking on her phone when she was approached by a woman she didn’t know.  That woman started to punch the victim.  Witnesses confirmed the report and stated the attack seemed unprovoked.