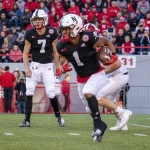 Nebraska opens the season October 24 at Ohio State. The two schools and fanbases were the most vocal about the Big Ten Conference football season returning. The other crossover game is a home game against Penn State November 14.

The Nebraska-Iowa game is back on Thanksgiving weekend.

Every team has eight scheduled games through December 12. On the weekend of December 18 and 19, the conference championship game will be played as well as an extra crossover game between teams finishing in similar positions in each division.

No fans will be allowed at any of the games, save for families of players. Multiple Big Ten administrators have said that could change later in the season.

The full schedule is below.

December 18-19 Conference Championship and Plus One Crossover Game

The Big Ten Conference announced today the schedule for the 2020 football season, including an eight-game Conference-only schedule starting the weekend of October 24 plus a ninth game for all 14 teams during a newly created Big Ten Champions Week the weekend of December 19. pic.twitter.com/jaDXMhh2C8