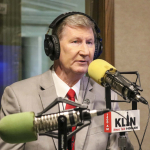 An announcement on Big Ten football has been expected since NU System President Ted Carter told KLIN “very soon” early last week, but that timeline is now narrowed down to Tuesday night.

Carter told KLKN after the news conference that what was heard on the mic was taken out of context.

“All I said is there’s work going on,” Carter said. “I’d remain cautiously optimistic, like everybody else, that we’ll get to discovering when its safe to play.”

The Big Ten Council of Presidents and Chancellor (COP/C) heard presentations from the Big Ten Return to Competition Task Force Sunday on medical changes over the past month. If an announcement were to come tonight, a vote by the COP/C would need at least nine votes for the conference to proceed with a season.