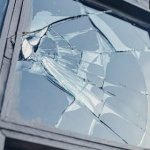 A 12 year old boy is a suspect in a vandalism spree Sunday around 2 p.m. near 12th and Rose.

Lincoln Police are investigating three vandalism in which a rock or other object was thrown against windows of homes.  During one incident, a witness identified the boy as the suspect.   Police found the boy near 22nd and Euclid.  The boy refused to follow officers’ orders to stop and when they tried to seat the boy in the police car, he began fighting the officers and kicking the side of the cruiser.  The boy then tried to damage the camera inside the cruiser and tried to use handcuffs to otherwise damage the cruiser.

Officers were eventually able to calm the boy and then took him back to his mother where officers completed a juvenile referral for the vandalism.

Officers were only able to link him to the vandalism in the 1400 block of Rose Street where damage is estimated at $100.  If residents in southwest Lincoln have damage to their home that happened during the late morning or early afternoon on Sunday, call LPD at 402-441-6000.