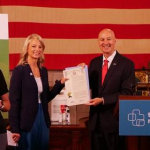 Governor Pete Ricketts proclaimed military caregivers as “Hidden Heroes” during a morning ceremony at the State Capitol.  The Governor and Nebraska Department of Veterans’ Affairs (NDVA) Director John Hilgert also announced that Nebraska has taken steps to become a Hidden Heroes state, joining the Elizabeth Dole Foundation’s initiative to identify military caregivers and support the work they do.

“Our goal is for Nebraska to be the most welcoming state in the nation for veterans,” said Gov. Ricketts.  “To reach our goal, we not only have to support our veterans and military members, but also those who care for them.  These front line caregivers are vitally important to our veterans’ well-being, and they deserve our recognition, thanks, and support.”

Andrea Dorsey of Omaha spoke on behalf of military caregivers in Nebraska and as a representative of the Elizabeth Dole Foundation’s Hidden Heroes program.  She described the challenging and rewarding work of caring for her husband, Joe, a military veteran and Purple Heart recipient who was injured in an explosion while serving in Iraq.

“While much recognition is given to our heroes in uniform, we owe many thanks and much gratitude to those who silently take care of our military and veterans as a sense of civic duty and patriotism,” said Nebraska Congressman Don Bacon.  “The Elizabeth Dole Foundation’s Hidden Heroes campaign is a small yet significant program in recognizing these caregivers.  I am thankful that Gov. Ricketts and the State of Nebraska have joined this heartfelt and supportive mission.”

Nebraska joined the campaign as the 156th community to sign on as a Hidden Heroes Community, one of the campaign’s key national initiatives designed to develop military caregiver resources at a local level.  Each Hidden Heroes city, county, or state signs on to help identify local military caregivers and leverage community resources to offer them vital support.  The State of Nebraska, through the Nebraska Department of Veterans’ Affairs (NDVA), will focus on several initiatives as a Hidden Heroes State.  These include raising awareness of the challenges faced by military caregivers and creating opportunities for assistance; honoring the state’s military caregivers through an annual observance, currently planned for May, the Month of the Military Caregiver; and sharing information on the Hidden Heroes program including the Military Caregiver Experience Map, which is now available at veterans.nebraska.gov/hiddenheroes.

“The men and women who care for veterans, whether it’s a family member, friend, or professional, face their own unique challenges,” said NDVA Director John Hilgert.  “In serving Nebraska’s veterans, we must also serve those who care for them, and through the Hidden Heroes campaign we’re hoping to shed light on their challenges and connect them with resources to overcome those challenges.”

Individuals caring for someone who served, or those who wish to support the campaign, can also visit HiddenHeroes.org for more information.

“I have dedicated my life to this cause because I’ve seen first-hand the tremendous impact our nation’s 5.5 million military caregivers make in the lives of our veterans each and every day, in neighborhoods big and small,” said former Senator Elizabeth Dole, Founder of the Elizabeth Dole Foundation.  “But their needs are overwhelming, and as a country, we must come together to find helpful ways to support them in their life-long journey of care.  That begins by encouraging our caregivers to raise their hands and become a part of our Hidden Heroes Caregiver Community.  It’s why our partnership with the State of Nebraska is so important.”

Senator Dole added, “The Elizabeth Dole Foundation envisions an America where military caregivers are empowered, appreciated, and recognized for their service to the nation.  Together, we are working towards a future where supporting military caregivers is no longer a cause, but it is part of the culture of our nation.”

The Elizabeth Dole Foundation is the preeminent organization empowering, supporting, and honoring our nation’s 5.5 million military caregivers—the spouses, parents, family members, and friends—who care for America’s wounded, ill, or injured service members and veterans at home.  Founded by Senator Elizabeth Dole in 2012, the Foundation adopts a comprehensive approach in its support and advocacy, working with leaders in the public, private, nonprofit, and faith communities to recognize military caregivers’ service and promote their well-being.  The Foundation’s Hidden Heroes campaign brings vital attention to the untold stories of military caregivers and provides a network for military caregivers to connect with their peers and access carefully vetted resources.  Visit HiddenHeroes.org for more information.