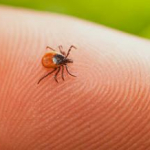 The Nebraska Department of Health and Human Services received a report of a death related to Rocky Mountain Spotted Fever, a disease carried by ticks. The man was in his 60s and lived in the West Central District Health Department, which includes Arthur, Hooker, Lincoln, Logan, McPherson and Thomas counties.
DHHS has also seen an increase in reports of people with Ehrlichiosis, another tick-related illness. On average, the Department receives four reports of Ehrlichiosis in a year, nine reports have already been received to date.
“Ticks can be efficient carriers of disease and these tick-related illnesses can be serious and sadly, sometimes fatal,” said Dr. Tom Safranek, state epidemiologist for the Nebraska Department of Health and Human Services. “In a year when many of us are spending more time outdoors due to the COVID-19 pandemic, Nebraskans need to practice the basics of tick prevention to reduce the risk of tick bites.”
“Although tick-related diseases are not seen frequently in our jurisdiction, ticks that can transmit diseases are still found here. It’s important for people to take simple steps to protect themselves and their families. It only takes one bite from an infected tick to make a person ill,” said Shannon Vanderheiden, Executive Director of WCDHD.
Protect yourself against tick bites:
A relative to mites and spiders, ticks are generally found near the ground and in brushy or wooded areas where they climb tall grasses or shrubs and transfer to a host brushing against them. They attach and feed on blood. Engorged ticks are more likely to transmit pathogens that can cause diseases.
DHHS conducts surveillance on four medically-relevant tick species: the American dog tick, Rocky Mountain wood tick, Lone Star tick, and Blacklegged tick/Deer tick. Those concerned about possible infection from a tick bite should contact a healthcare provider. Suspected infections should be reported to a local health department or DHHS.
If you find an attached tick:
Some pets are also susceptible to tick-related disease.  For details on how to protect your pet, click here.