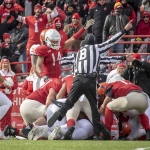 The Big Ten has responded to a lawsuit brought on by eight Nebraska football players about the postponement of fall sports.

According to multiple reports, the Big Ten’s Council of Presidents and Chancellors (COP/C) voted 11-3 to postpone the fall sports season. How each school voted remains unconfirmed, though ESPN’s Adam Rittenberg is reporting that Nebraska, Ohio State, and Iowa were the three dissenting votes.

League sources tell ESPN that #Nebraska, #OhioState and #Iowa are the three schools that voted against postponing the fall season. This will surprise absolutely no one who has followed the story.

Whether or not a vote had taken place was one of the concerns brought in the players’ lawsuit. Minnesota President Joan Gabel said that they “didn’t vote per se”, while Penn State athletic director Sandy Barbour said it wasn’t clear to her if a vote occurred.

University of Nebraska at Lincoln Chancellor Ronnie Green, a member of the COP/C, told KLIN’s Road to Recovery earlier in August that a vote had a taken place, that it was not unanimous, but that it did have “overwhelming support” for postponing fall sports.

If the judge allows, the lawsuit may continue in an attempt to uncover more information from the decision making process.