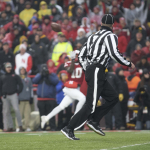 In a 13-page document shared by Nebraska Cornhusker Football Parents (@ParentsNebraska) on Twitter, the lawsuit raises three counts against the Big Ten: wrongful interference with business expectations, breach of contract, and declaratory judgement. It is filed in the District Court of Lancaster County.

Lead attorney Mike Flood says the lawsuit “isn’t about money or damages, it’s about real life relief.” Flood says the student-athletes followed all the advice and guidelines “of the world-class experts at UNMC for the chance to play football” this season. Flood adds that “vague reasoning and no explanation” were given for the decision by the conference to postpone fall sports.

“Sadly, these student athletes have no other recourse than filing a lawsuit against their conference,” said Flood. “The Presidents and Chancellors of these Universities have taken inconsistent positions about whether there was a vote, and they have largely failed to explain what positions they took.

“Our Clients must take their claims to the Courthouse to find the justice and fairness they have been denied the Big Ten Conference that has failed to answer basic questions.”

The lawsuit does include an Irrevocable Damages Limitation, saying that the eight plaintiffs, will not “seek damages of $75,000 or more in this action and will never seek, collect, recover, or accept damages” of that same amount or higher from this action. It closes by saying the players “request an Order declaring invalid the Big Ten’s purported decision to cancel the 2020 fall Big Ten football season”.