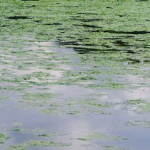 The state has issued health alerts for Harmful Algal Blooms, also known as toxic blue-green algae, at Calamus Reservoir in Loup County, Bluestem Lake in Lancaster County, Johnson Lake in Dawson and Gosper counties, Kirkman’s Cove Lake in Richardson County and Oliver Reservoir in Kimball County.
Wagon Train Lake in Lancaster County, Rockford Lake in Gage County and Willow Creek Reservoir in Pierce County continue to be on health alert.
Samples taken earlier this week at these lakes were above the health alert threshold of 8 parts-per-billion of total microcystin (a toxin released by certain strains of blue-green algae). This is a lower threshold than previous years, based on recommendations issued in 2019 by the U.S. Environmental Protection Agency (EPA).  Previously, the State of Nebraska had set a limit of 20 ppb, but adopted the new limits after concluding that the new EPA threshold is based on the best scientific evidence available, and is protective of public health.

When a health alert is issued, signs are posted to advise the public to use caution, and designated swimming beaches are closed during the alert. Recreational boating and fishing are permitted, but the public is advised to use caution and avoid exposure to the water, particularly avoiding any activity that could lead to swallowing the water. Do not let pets get in the water or drink from the lake. People can still use the public areas for camping, picnics and other outdoor activities.

Weekly sampling has been conducted at 52 public lakes since mid-May. The lakes will continue to be monitored weekly through the end of September.