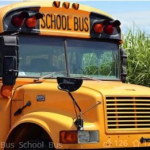 As Nebraska students begin the school year – whether in the classroom or virtually — AAA is urging motorists to slow down and stay alert in both neighborhoods and school zones.

As part of AAA’s annual School’s Open, Drive Carefully campaign, motorists are advised to expect to see children or school buses along their travel routes throughout the day and to be extremely cautions around school zones and bus stops.

“This pandemic could create risky conditions on the roadway as drivers may be unsure of when and where they may encounter children,” said Gene LaDoucer, Nebraska spokesman for AAA – the Auto Club Group. “Drivers should treat neighborhoods like school zones as students taking virtual classes could be outside at various times throughout the day.”

According to the National Highway Traffic Safety Administration, the greatest risk to a child isn’t riding a bus, but approaching or leaving one. From 2008 to 2017, there were 264 school-age children killed in school-transportation-related crashes. The majority of those students weren’t on the bus; 203 were either walking, waiting for the bus, biking, or in another vehicle.

To help raise awareness in neighborhoods, AAA is offering free “Slow Down, Watch for Children” yard signs to members and non-members. The signs are available in AAA branch offices in Omaha, Bellevue, Grand Island, Lincoln and Norfolk. To find the address or phone number of branch locations, visit AAA.com.