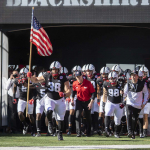 Huskers and Hawkeyes want to play football this fall.

So do a number of other assorted mascots and players like quarterbacks Trevor Lawrence and Justin Fields from Clemson and Ohio State, respectively. But here we’re talking administrative leaders, specifically the Big Ten Council of Presidents/Chancellors (COP/C).

According to Dan Patrick on the self-titled Dan Patrick Show Monday morning, the Big Ten held an internal vote on whether or not to have a fall season. That vote was reportedly 12-2 in favor of not playing. The two votes against: Nebraska and Iowa.

Those two dissenting votes from Corn Country, University of Nebraska-Lincoln Chancellor Ronnie Green and University of Iowa President Bruce Harreld, show that the Big Ten is not unanimous against college football in 2020. The COP/C is reportedly meeting again today.

NU System President Ted Carter has said he expects Nebraska to not only play football this fall, but begin with fans in Memorial Stadium. Nebraska Athletic Director Bill Moos has gone so far as to say he wouldn’t discount the idea of full capacity home games.

One big voice for Nebraska fans that has yet to be heard is head coach Scott Frost. He is currently scheduled this afternoon for a 1:30 pm Zoom press conference with media.