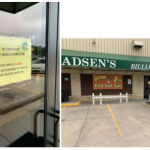 Madsen’s Bowling and Billiards was given until the end of the day to submit to the Lincoln-Lancaster County Health Department a compliance plan that is in line with the recommended health directives.

Signs were put up by Health Department officials this morning stating the business would be closed until further notice. Owner Benjamin Madsen showed up a short time later and took down the signs. He opened at his regular 11 a.m. Madsen was ordered by the Health Department to close last Saturday for violating health directives. Madsen stated he drew a line in the sand to fight the order and the issue landed up in civil court this week.

City officials say that Madsen’s attorney contacted the city after the notices were placed on the door and the city is working with the business to see if they can get into compliance and remain open. If that doesn’t happen, City Attorney Yohance Christie says further action would be taken. What those actions would be is not known.

A citation will be issued to the business that involves a $500 penalty and/or six months in jail. There are no plans to make any arrests.