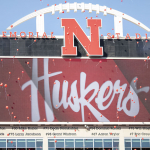 The Big Ten has finally released a football schedule.

Last Thursday, the conference sent a letter to member athletic directors saying a decision on preseason camp would be made “within 5 days”. Since making a conference-only decision for fall sports at the beginning of July, all other Power 5 conferences have made more detailed announcements on fall football. That is, until today.

The conference will play a 10-game schedule beginning September 5 and running through November 21 with dates available to move games. The Big Ten Championship is tentatively scheduled for December 5.

Nebraska opens the season at Rutgers September 5. As of Monday night, NJ.com reports at least 28 positive COVID-19 cases related to the football program.

“We welcome these important steps forward for fall football from the Big Ten. There has been a tremendous amount of consultation and hard work to get to this point. It was a team effort with valuable input from the Big Ten Conference staff, University chancellors and presidents, head coaches and athletic directors to develop a football schedule that prioritizes divisional games and provides some needed flexibility.

“The top priority remains to conduct a football season in the safest and healthiest manner possible for everyone involved. There are still many steps ahead before we can take the field in September, beginning with opening preseason camp later this week. But there is no question this is an exciting day at Nebraska. Our players and coaching staff now have a schedule in front of them, and Husker fans can see how the 2020 season will unfold.

“Our next task is finalizing many of the details and protocols for football game days at Memorial Stadium in 2020. We will be announcing those details very soon after consultation with state and local officials. We want to especially thank Dr. Chris Kratochvil of UNMC for his work leading the Big Ten Task Force for Emerging Infectious Diseases. He has been immensely helpful in helping to guide the conference forward.

“Nebraska is getting closer to seeing our beloved Huskers take the field. We, and all of Husker Nation, very much look forward to our first away game on September 5 at Rutgers and our first home game the following week against Illinois.”

Ohio State and Illinois will open on Thursday with Indiana and Wisconsin Friday. All others open on the Saturday. You can see the full schedule for the entire conference below. 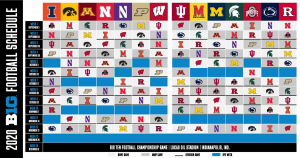 In the Big Ten release of the football schedule, the conference says they acknowledge “that there is much work to be done on our campuses, in our communities and across the country to gain control of a virus that continues to spread at an alarming rate. While the Conference remains hopeful for a September 2020 start in all fall sports, including football, issuing a schedule does not guarantee that competition will occur.”

Other fall sports including men’s and women’s cross country, field hockey, men’s and women’s soccer, and women’s volleyball have all had their competition start dates postponed through at least September 5. Those schedules “will be released at a later date as scheduling for these sports remains fluid.”

The Big Ten also released their medical protocols for fall sports. Among the protocols are testing at least once a week, with twice a week testing for high contact sports, centralized testing across the conference by a third-party, and the ability for schools to test more than what the conference is issuing. High contact sports include basketball, football, soccer, and volleyball.

Those that positive for COVID-19 will be isolated for least 10 days. Those that come in close contact to a positive case will have 14-days of required quarantine, without the ability to test out.