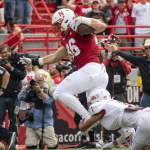 Stoll has started the last 24 games at tight end for the Huskers. He caught 25 passes for 234 yards and a touchdown in 2019. This is Stoll’s third time on the Mackey Award watch list.

Below is a list of National College Football Awards Association 2020 preseason watch lists being unveiled this month.