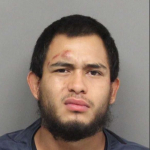 A Lincoln police officer was bit on arm during a struggle with a suspect just before midnight near 66th and Holdrege Street.
Officers tried to stop a vehicle near North 66th and Orchard but the driver took off.  A run of the license plate showed the same vehicle had earlier run from a traffic stop.
Officers were able to follow the car the second time when it pulled over and they saw a man run inside.  Additional officers were called and the building was surrounded.  Officers then started to negotiate with 22-year-old Junior Salguero to get him to surrender
Salguero started to walk downstairs but changed his mind and tried to run back to an apartment.  Officers caught up to him but Salguero resisted arrest and refused to let go of the handrail.  That led to a struggle where an officer was bitten on the left and right forearm, breaking the skin.  Another officer had several cuts and scrapes from the struggle.
Salguero was cited for operating a motor vehicle to avoid arrest, obstruction of a police officer and assault on a police officer.