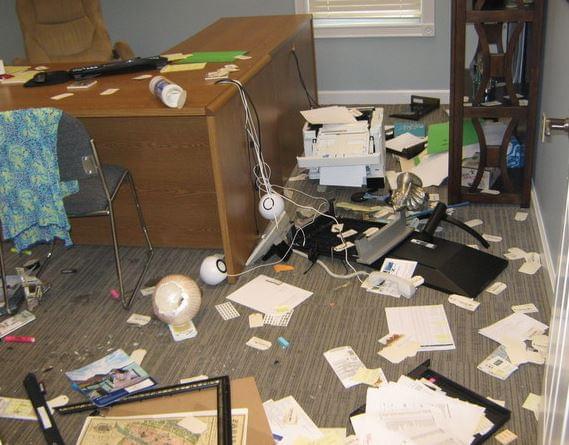 A man is arrested after trashing a local business.

Officer Erin Spilker reported police were sent to Cornerstone Travel in the 5700 block of South 34th St. just after 7 a.m Saturday after a passerby reported a man lying in bushes outside of the building.

On arrival, officers made contact with 26-year-old Jeremy Thomas, still lying in the bushes.

“Several windows had been broken in the back of the building,” said Spilker. “Once inside the building they (officers) found desks and cabinets tipped over, computers thrown on the floor, tables broken and everything was in disarray.”

Teo bottles of alcohol were also reported missing from the business.

Officers located evidence that Thomas had been inside the building.  Thomas also had an injury to his arm consistent damage to the windows and items inside

Thomas was arrested for felony criminal mischief due to the estimated damage exceeding $5,000.