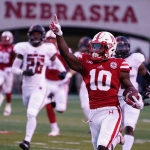 College football fans will need to wait a little longer for more specifics on the upcoming season.

The conferences, including the Big Ten, and television networks released a joint statement Tuesday, agreeing to an extension for determining early season game times and network designations. Typically, those decisions are made by June 1.

The season itself is still in limbo for how it will play out. The NCAA last week announced that all-student student-athletes can return to campus for voluntary athletic activities beginning June 1. But at least one school president, Michigan’s Mark Schlissel, has said if students are not on campus then no athletic competitions will happen, at least for his institution. Other schools have announced limits for home seating.

Nebraska is scheduled to open the season September 5 against Purdue.