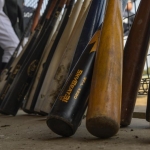 Guidelines for some summer sports give specified dates for practices and games to take place next month.

At his Monday press briefing, Nebraska Governor Pete Ricketts laid the groundwork for softball and baseball to take place this summer. Other sports will have guidelines released “as it is determined participation in those sports meet health and safety measures.”

Under the current rules from the state, no organized team activities can take place through the month of May. That changes in June.

“Starting June 1, we will allow team organized practices with lots of restrictions on social distancing to begin and games to begin June 18,” said Ricketts. “This will just be for baseball and softball, no other sports.”

Ricketts added that individual sports such as tennis are still permissible, saying, “those were things that were never specifically closed.”

In June, schools can open weight rooms for student-athletes as long as they follow the same guidelines currently in place for fitness centers. For baseball and softball practices, dugouts won’t be allowed for use and team equipment will need to be spaced out along fences at least six feet apart. Parents will need to drop off their players then wait in their cars until practice is over. Players are encouraged to use their own gloves, helmets, and bats as much as possible, as well as water bottles or other beverages with no shared drinking fountains or coolers allowed.

When games begin June 18, only members of the player’s household will be allowed to attend. Bleachers will not be in use so fans will need to either stand or bring their own chairs while keeping the six feet of social distancing from different household units. Teams waiting to play in the next game will have to wait in a designated area until the previous team has disinfected the dugout area. After the games, no postgame handshake or interaction will take place, nor will the traditional team meeting and snacks. Concessions will remain closed, but restrooms are expected to be open and cleaned often.

Ricketts said that they chose baseball and softball because “those are sports that are generally more socially distanced anyway.”

Lincoln Babe Ruth Baseball Commissioner Jim Hansen told KLIN’s Road to Recovery earlier this month that they have contingencies for beginning games June 1, 8, or 22. Hansen called June 22 the “point of no return”, but with the latest guidelines, the league looks poised to take place.

The American Legion National Headquarters Sunday canceled their official association with any summer baseball that gets played this year. That doesn’t mean no Legion Baseball though, as teams can still organize themselves and compete without being under the American Legion umbrella.

Nebraska Education Commissioner Matthew Blomstedt said the efforts with baseball and softball will show the best practices for team sports returning, adding schools have been asking a lot of questions on use of their facilities.

“I want to be able to use Launch Nebraska and work with our school officials across the state so as soon as possible after June 1 we actually have protocols in place that would be able to identify what the proper and appropriate us of school facilities are,” said Blomstedt. “We’d be able to look at what the protocols that might be coming together around other types of activities and sports, but not least of which is also to think about services for students in a summer school environment as well.”

Blomstedt announced Launch Nebraska last week with the website launchne.com to serve as a central resource for the state’s education system, providing protocols and best practices to aid local decision-makers.

“We’re using baseball and softball around sports; we’re using other opportunities to learn about what’s really best; using these types of DHM orders coming forward to provide further guidance, and have what I’ll call a common sense approach,” said Blomstedt. “Once we start to do something here and we believe it’s had a safe impact, we can model that for other types of activities.”