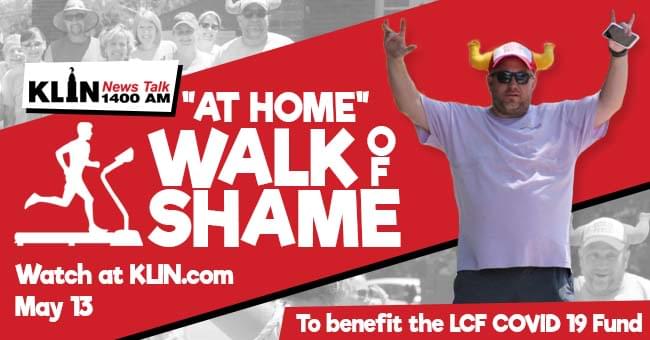 Nearly a decade ago, in early April, KLIN’s Jack Mitchell was boldly proclaiming to his radio co-host Dave Miller that winter was over. Dave told Jack to put his money where his mouth was. For whatever reason, Jack upped the ante by saying that if any day until the end of summer had a high temperature of 60 degrees or less, he’d ‘walk across the city’. As it turned out, a couple weeks later, a cool late April day failed to get to 60 and Jack had to pay up, walking from Lincoln North Star to Lincoln Southwest.

Since then Jack has made four different walks across the city in years where his ’60-Degree Guarantee’ has failed. And once again, this year, he’s made a promise about the weather that he didn’t keep. But this year, with so many people at home, Jack decided he’ll be doing his walk a little differently: from his basement. The bad news is that he won’t be walking the streets of Lincoln, but the good news is that now you can watch every minute of it, and he can talk with guests, community members, celebrities and viewers for the entirety of the walk

And as always, the goal here will be to support a great cause. This time it’s Lincoln Community Foundation’s Lincoln Covid-19 Relief Fund, which grants money to local nonprofits helping those Lincolnites who are impacted by Covid 19 and its aftermath the most. So, if you enjoy the walk, and can donate, please do. In fact, Jack may even negotiate with you to do something crazy, wear something, say something, talk to someone or otherwise embarrass himself in exchange for your donation. Tune in here starting at 8:30 a.m. (until 6 p.m.-ish?) on Wednesday, May 13.