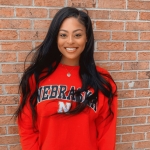 A graduate transfer has been added to the Nebraska volleyball roster for the 2020 season.

Coach John Cook announced the addition of 6-foot middle blocker Kayla Caffey. She graduated from Missouri and will have two years of eligibility remaining to use at Nebraska.

“Kayla will bring a lot of offensive firepower to our team,” said Cook. “She was one of the leading hitters in the SEC and we like the fact that she’s a graduate student and has a lot of experience. She played at a storied high school program, Mother McAuley in Chicago. She’s got an offensive-oriented game and is very athletic. We’re excited about the impact she can make with our team.”

Caffey ranked second in the SEC and ninth nationally with a .408 overall hitting percentage in 2019. The Tigers went 22-8 and were eliminated in the second round of the NCAA Tournament by the Huskers in Lincoln.