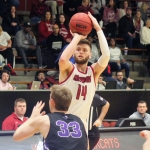 The roster for year two of the Fred Hoiberg era is shaping up with another commitment.

Sharpshooter Trevor Lakes shot nearly 40-percent from beyond the arc this past season for Division II University of Indianapolis. The 6-7 forward led the Greyhounds in scoring each of his sophomore and junior seasons, averaging 15.7 points and 6.2 rebounds for the 24-6 and no. 15 team in the NCAA Division II coaches poll.

“We are excited to have Trevor join our program,” said Hoiberg. “He is an elite shooter with size and a high basketball IQ, and his skillset and understanding of the game will allow us to be creative in how we can maximize his abilities in our system. Trevor is a proven scorer who brings experience and a competitive spirit that will push everyone in our gym to play at a higher level.”

Nebraska offered Lakes a scholarship April 14, expecting him to fill the final opening. Since then, Kevin Cross has entered the transfer portal while walk-on Charlie Easley announced his departure for South Dakota State.

Hoiberg has one scholarship still to fill for 2020-21.

In his first season at the helm, Hoiberg brought in sharpshooter Matej Kavas from Seattle University. Kavas shot 46-percent from 3-point range in his final year for the Redhawks. In his injury shortened long season at Nebraska, he averaged 5.3 points a game while shooting nearly 34-percent from deep.

The Huskers have a history of Division II sharpshooters getting their Division I feet wet in Lincoln.

Under coach Doc Sadler, 6-4 Drake Beranek transferred from University of Nebraska-Kearney where he had a 17.9 points a game scoring average while shooting 43-percent on threes his final year for the Lopers. He shot 31-percent from beyond the arc while appearing in all 32 games in his only season at Nebraska.

Under coach Barry Collier, Lincoln Christian grad 6-8 Andrew Drevo transferred in from Morningside College. As a sophomore for the Mustangs, Drevo made 49-percent of his 3-point attempts while scoring 14 points and grabbing eight rebounds a game. As a junior at Nebraska, he scored 13.9 points and grabbed 7.3 rebounds a game on 32-percent shooting from deep. In his final year, Drevo again shot 32-percent on threes while averaging 10.1 points and four rebounds.