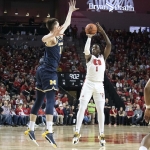 One of the best scorers off the bench is leaving Nebraska men’s basketball.

True freshman Kevin Cross made the announcement on social media Tuesday. He thanked the fans and coaching staff, saying, “You guys are so passionate about the Huskers and appreciate all the love and support I’ve received from my time as a Husker.”

Cross appeared in all 32 games, starting twice. He averaged 7.1 points and 3.9 rebounds per game. In the final game of the season against Indiana at the Big Ten Tournament, he tied or set career highs with points (23), rebounds (nine), 3-pointers (four) and free throws made (five) and attempted (five).

This is now the fifth player to leave the program after coach Fred Hoiberg’s inaugural season. Joining Cross as underclassmen to either transfer or test the NBA draft process are Cam Mack, Dachon Burke Jr., Jervay Green, and Charlie Easley.