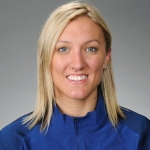 The second member of the 2020 Nebraska Athletic Hall of Fame, and first student-athlete, has been announced.

A native of Hooper, Nebraska, Jordan Larson played on some of the greatest Husker volleyball teams in program history from 2005 to 2008. During her time, Nebraska went 127-8, winning four Big 12 Conference Titles, going to three NCAA Semifinals, taking National Runner-up in 2005, and winning the National Championship in 2006.

Larson, a three time All-American and two-time first-team All-American, was a two-time Big 12 Defensive Player of the Year and the 2008 Big 12 Player of the Year. As a senior, Larson was also an Academic All-American. She finished her Husker career with 1,600 kills, 1,410 digs and a school-record 186 aces and is currently one of two players in program history to rank in the program’s all-time top 10 for both kills and digs.

After Nebraska, Larson continued playing at the international level. She is a two-time Olympic medalist, helping Team USA to a silver medal in 2012 and a bronze in 2016. Larson also helped Team USA to the 2014 world championships gold medal. She has been named USA Volleyball’s Indoor Female Player of the Year twice, in 2015 and 2016.

Another facetime from @jcook2.

This time @JordanLarson10 is on the other line.

Wonder what he has to say… 😁 pic.twitter.com/M3gdDJEhs1

Larson joins former volleyball coach Terry Pettit for the 2020 class. The other four selections will be announced over the next few weeks.