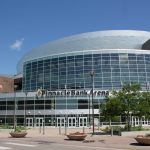 Nebraska Athletics made the announcement Sunday. The teams will begin with a neutral site matchup December 19, 2020, at the Sprint Center in Kansas City. The other two games will be played December 18, 2021, in Lincoln and December 17, 2022, in Manhattan.

“We are excited to renew this series with Kansas State,” said Nebraska Coach Fred Hoiberg in a release. “There is more than a century of history between the two programs, and this is a matchup that our fans will look forward to over the next three seasons.The series upgrades our non-conference schedule as we build our program.

“Playing in the Sprint Center this December should also be a fun experience for our fans and student-athletes because of the number of Husker alums in the Kansas City area and the ability to make it a weekend trip around the holidays.”

The Wildcats lead the all-time series 127-93 and have won the previous five meetings, including the last matchup 61-57 in 2011 at the Devaney Center.

Kansas State finished this past season at 11-21 (3-15 Big 12) while Nebraska went 7-25 (2-18 Big Ten). Both teams will look different next season with graduations and transfers.

This is the second non-conference addition to the 2020-21 season for Nebraska, as ESPN previously announced the Huskers will compete in the Myrtle Beach Invitational November 19-22.