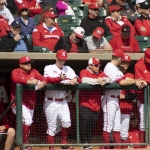 A question mark through the first 13 games, pitching was the strength in the first midweek series of the season for Nebraska (7-8, 0-0)

The Huskers took a 1-0 win Tuesday, then turned around Wednesday and used five pitchers to notch an 8-1 win over Northern Colorado (4-12, 0-0 WAC).

Freshman Quinn Mason made his first career start, going 3.0 innings and allowing one hit while tallying two strikeouts. Mason was followed by Ethan Bradford, Kyle Wisch, Tyler Martin, and Jaxon Hallmark who combined for 6.0 innings, giving up two hits and allowing one run while striking out nine batters.

Husker hitters, meanwhile, dominated the first third of the game, scoring four runs in the first inning then two in each of the second and third innings.

Aaron Palensky had a career-high five RBIs while going 2-for-5 on the day. Hallmark also went 2-for-5 and added two RBIs.

After a 1-7 start, the Huskers have won six of the last seven.

Nebraska heads to Wichita State (13-2, 0-0 American) this weekend for four games over the three days, beginning at 3 p.m. Friday.