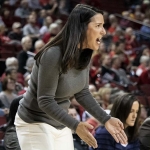 Nebraska women’s basketball knew what needed to be done to make the NCAA Tournament: a run through the Big Ten Conference Tournament this week.

Those hopes fell with a third quarter collapse.

Nebraska coach Amy Williams told the Big Ten Network going into the locker room that she was disappointed in her team’s rebounding to close the second quarter. That would be an issue for the Huskers as Michigan dominated the boards, especially on the offensive end for second chance points.

Out of the half, the Wolverines took control of the game. The Wolverines started that half with a 15-2 run. That margin would extend to 58-52 going into the final quarter.

Michigan took the lead to as much as 12 and made all eight of their final points at the line to win 81-75.

The Wolverines shot 46.2-percent for the game and grabbed 35 rebounds compared to Nebraska’s 27. Michigan had 19 of those rebounds on the offensive end, turning them into 24 second-chance points.

The Huskers shot 50.9-percent from the field, including 7-of-19 on three-pointers.

Leigha Brown led four Huskers in double-figures as she scored 22 points. Issabelle Bourne poured in 16 points while adding team-highs in rebounds(6) and blocked shots(5). Kate Cain made all six of her shots on the day for 12 points. Sam Haiby added 10 points.

Nebraska is not projected to make the NCAA Tournament with an at-large bid. That means if the season does continue, it will likely be in the Postseason WNIT which will be announced selections March 16.