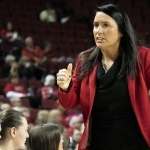 Nebraska coach Amy Williams this week that she wanted her team to go into Bloomington and build momentum for next week’s Big Ten Conference Tournament. Instead, the Huskers (17-12, 7-11 Big Ten) were reminded of what the top of the conference looks like.

Just days after making 13 three-pointers, Nebraska reverted to struggles from deep. The Huskers managed just three in the first half on 11 attempts, and went just 1-of-5 after halftime.

The middle quarters were played nearly even, with Indiana winning the second and third quarters by a combined 29-28. But those would be the two best quarters for the Huskers.

The Hoosiers opened up the fourth quarter by going 9-for-11 from the field, including 4-for-4 from three-point range as part of a 23-4 run. Indiana coasted the final few minutes to the 81-53 final.

Nebraska shot just 27.9-percent from the field for the game.

Leigha Brown led the Huskers in scoring with 22 points on 7-of-12 shooting. Hannah Whitish added 11 points.

With the regular season at an end, the Huskers are off until the Big Ten Tournament in Indianapolis, March 4-8.