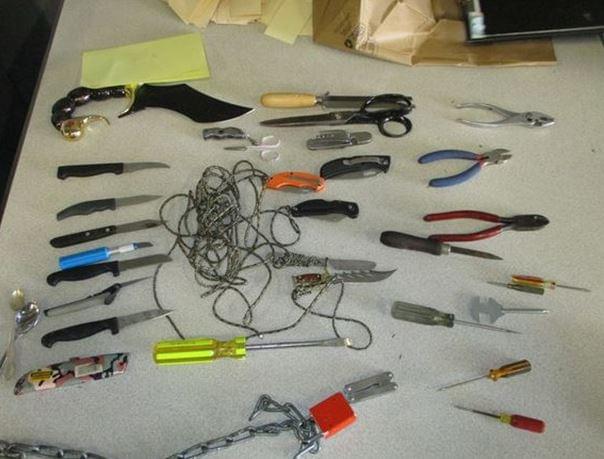 A man who fled from police is found with meth and at least 10 illegal knives on his person.

Officer Erin Spiker says officers were in the area of 16th and B Streets around 10:30 AM Tuesday after receiving calls of two men checking house and garage doors in the area.

She says an officer spotted a man on a bike in the area and tried to make contact, but the man took off.

At one point during the pursuit, the suspect rammed his bike into a police cruiser, causing $80 in damage.

When his bicycle collided with the cruiser the officer observed that a large knife fell from the suspect.

21-year-old Ryan Grey was eventually boxed in by officers and taken into custody.

A search of his belongings found over 10 concealed knives, an icepick, various tools, and a 17-inch chain with orange lock and less than a gram of methamphetamine.

Gray was arrested for two counts of possession of a controlled substance, carrying a concealed weapon, 2nd subsequent offense, Possession of a deadly weapon by a prohibited person, criminal mischief, and failure to comply.

He was also arrested for two outstanding warrants as well.