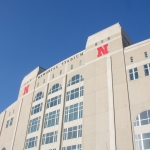 It has been one of the more talked about staff positions with Nebraska football this offseason, and now the Special Teams Coordinator position has been filled.

Jonathan Rutledge took to Twitter Tuesday to make the announcement of his departure from Auburn and his excitement to join Scott Frost.

Along with a picture of himself in Memorial Stadium and another of his daughter, Harper, Rutledge penned his farewell.

“First, my family and I would like to thank Coach Malzahn, Coach Porter, and the rest of the Auburn staff for giving us the opportunity to be at a place like Auburn. It is a special place made of truly special people.

“I want to thank the players for always working hard and putting everything into being the best they can be. I will definitely miss you guys, and look forward to seeing the big things you will do in the future.

“Auburn will always hold a special place in our hearts. It’s where our daughter Harper was born. It’s where we planned out wedding. We met incredible people there that we will call friends for life.

“That being said, we are so excited to officially announce we are headed to the University of Nebraska. We can’t thank Coach Frost enough for giving us the opportunity to help bring championships back to this proud, storied institution and state.

Rutledge has coached special teams in the ACC, SEC, and now the Big Ten. In his first season at Auburn, Rutledge helped improve the Tigers’ punting unit to fifth nationally in net punting after ranking 115th the previous season. His record also boasts having coached Ray Guy and Lou Groza Award semifinalists.

With the assistant coaching staff full at 10, Rutledge fills the role with the official title of Senior Special Teams Analyst.