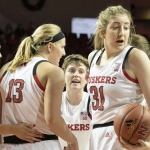 At the time of year when every game feels like it has more weight on postseason hopes, Sunday was almost a shot in the arm for the Huskers.

The Huskers shot 43.1-percent from the field for the game, but committed 15 turnovers.

The Wildcats won the battle at the free throw line, going 17-of-19 compared to Nebraska’s 8-of-11.